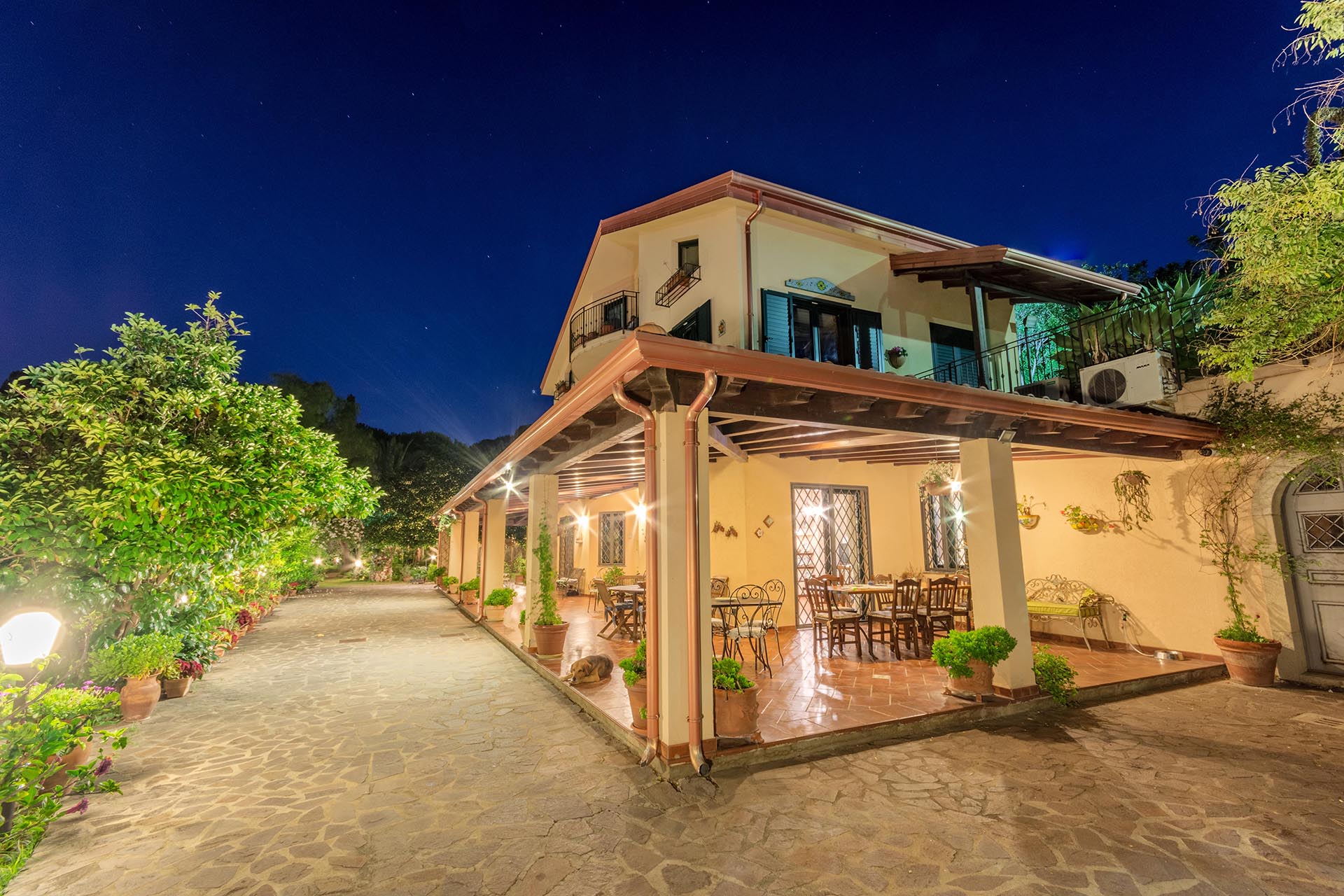 A garden is the manifesto of life, a spectacular representation of the passing of the seasons and of time.

Villa Labruto is next to Cape Peloro in the northeastern tip of Sicily and is located in the village of Sant'Agata, now part of Messina. The mountainous area, formed by sand and residual gravel from the Middle Pleistocene era, benefits, from the climate point of view, from the sun of Sicily and the winds from the Strait that mitigate the high temperatures in summer and the low ones in winter. The area, at the north of the Annunziata torrent, from the late eighteenth century onwards has become the natural expansion for the residential villas of the rich messinians who "colonized" those places which, already by their names (Contemplation, Peace, Paradise) gave testimony of the beauty of the place. Grand villas were, at the Belle Epoque the chosen destination of the Italian and European nobility and still testify, with their magnificence, the sense of taste and economic level messiniens of those times had; for instance the banker Mauro Amati, who bought extensive land in Sant'Agata. This land was later divided and sold, because his economic situation had changed. A great part of this land, the villa and the farming facilities, acquired at the beginning of the twentieth century is, what we know nowadays as Villa Labruto. Immediately after the war considerable work was needed to rebuild the "old house", with access from Via Consular Pompea, and plant trees in the garden that was also damaged. Located at the bottom of the valley, because it was closer to the village, it was used again by the family to spend the summers. Much of the land became home orchards and home to greenhouses. After the dismantling of the greenhouses and giving free rein to passion, from the 90s onwards, the upper part of the plot was turned in to a garden, keeping however a stil part of it as an orchard, where we still find the vineyard, the citrus and the olive trees, some of the latter centenarian.

The project that gave birth to "Villa Labruto" in terms of opening its gardens and open spaces to the public, was conceived a few years ago, for different but complementary reasons. On one hand an artistic motivation, supported by the passionate and thorough research, for over 15 years, of more than 400 species of flowers and plants found there, and which are offered as a work of art, with infinite and changing hues, to all those who can appreciate their delicate beauty. On the other hand it is a conscious natural choice of creating a space dedicated to the animals bred in freedom and fed with natural products, along with the major restoration project of the former residence that will welcome guests in independent lodgings with their own access and garden area. Respect for the environment, in the truest sense of Rousseau's return to nature, is one of the basic pillars of a more ambitious project that will evolve over time, in accordance with the principles of those who conceived the original idea. Guests of "Villa Labruto" will actually enjoy, at all times, an experience that combines the comfort we all look for when away from home, with the perfect harmony that the natural environment manifests itself in every detail. Thus, the option to choose between a modern latex pillow or one of pure wool, or the chance to feel the warmth from a wood stove or to cool down with modern air conditioning systems, savour the fruits from the garden, taste the produce from the orchard, to live surrounded by lavish greenery but at a stone's throw from the sea, relaxing in the pine grove or lay on the grass, discover the many species of plants and flowers, organizing a special event in this environment... are just some of the possibilities that will make you chose, and hopefully love, "Villa Labruto".

"Villa Labruto" is located in the village of Sant'Agata and occupies a large plot that descends from the hill almost down to the sea. The grounds consist of: a large garden, an orchard with fruit and vegetables, pine grove, a central area that houses poultry and two villas; the "new one" at the top, which is accessed through the Strada Panoramica dello Stretto and the "old one", with entrance on Via Consolare Pompea, currently undergoing restoration and modernization works of the rooms. 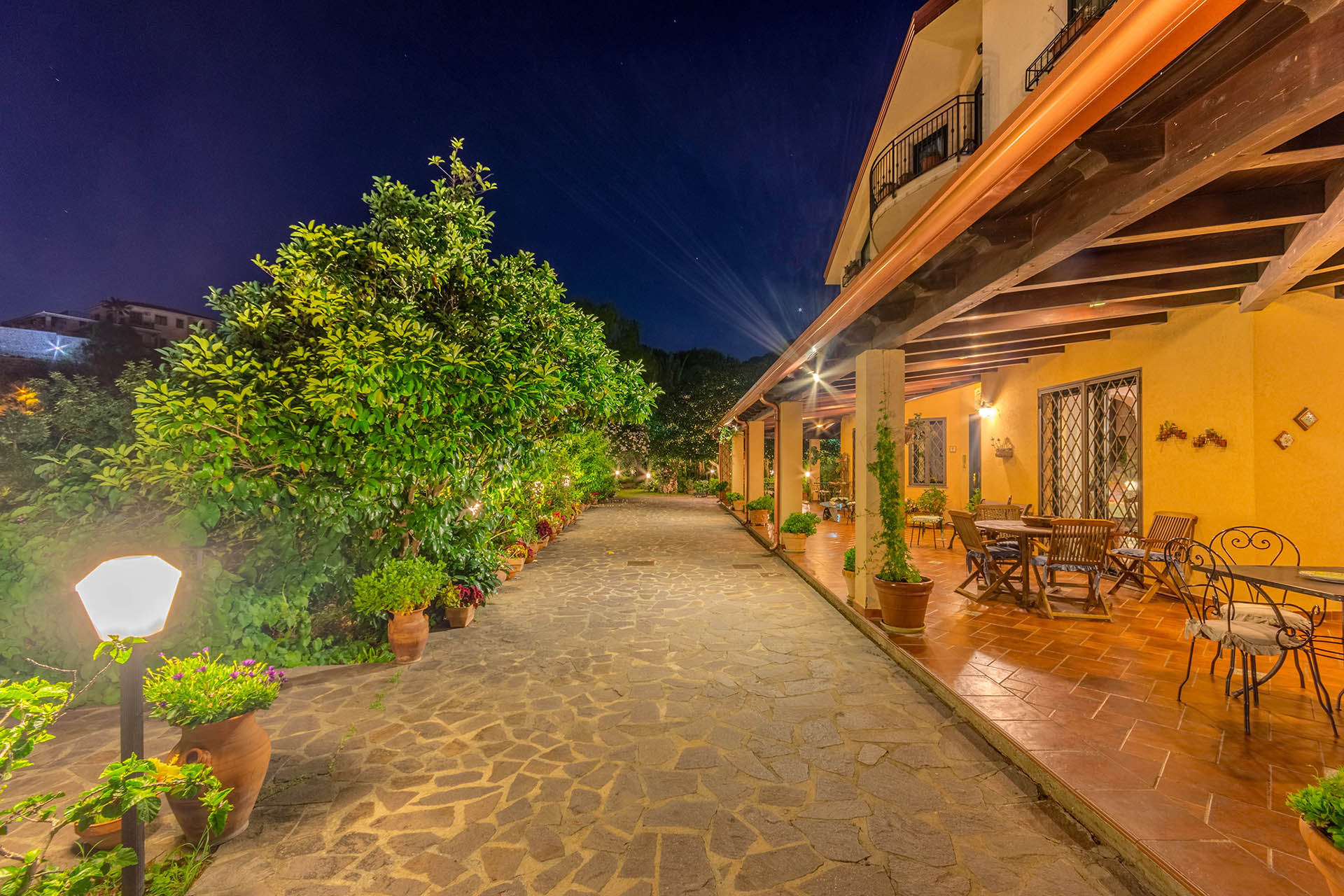 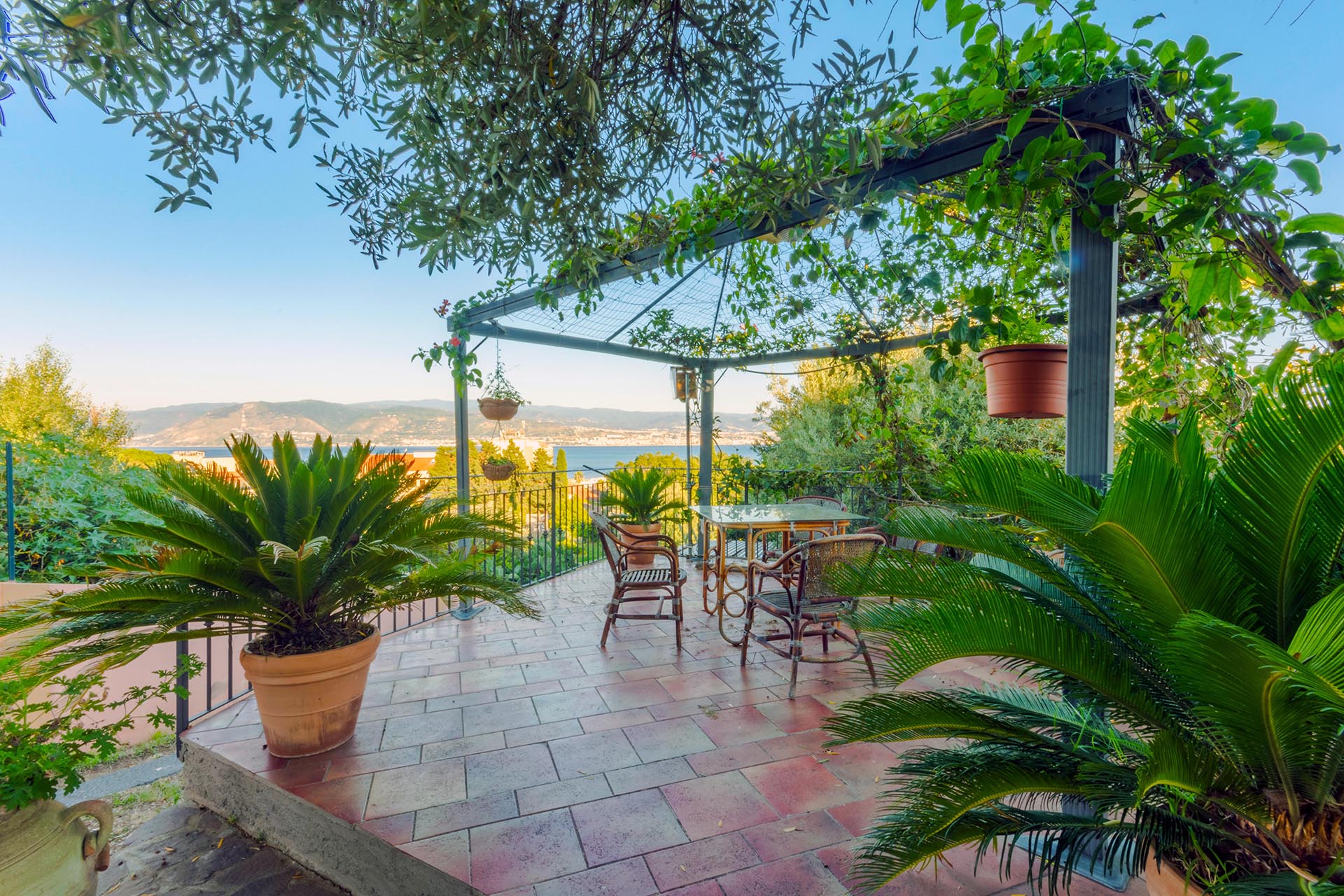 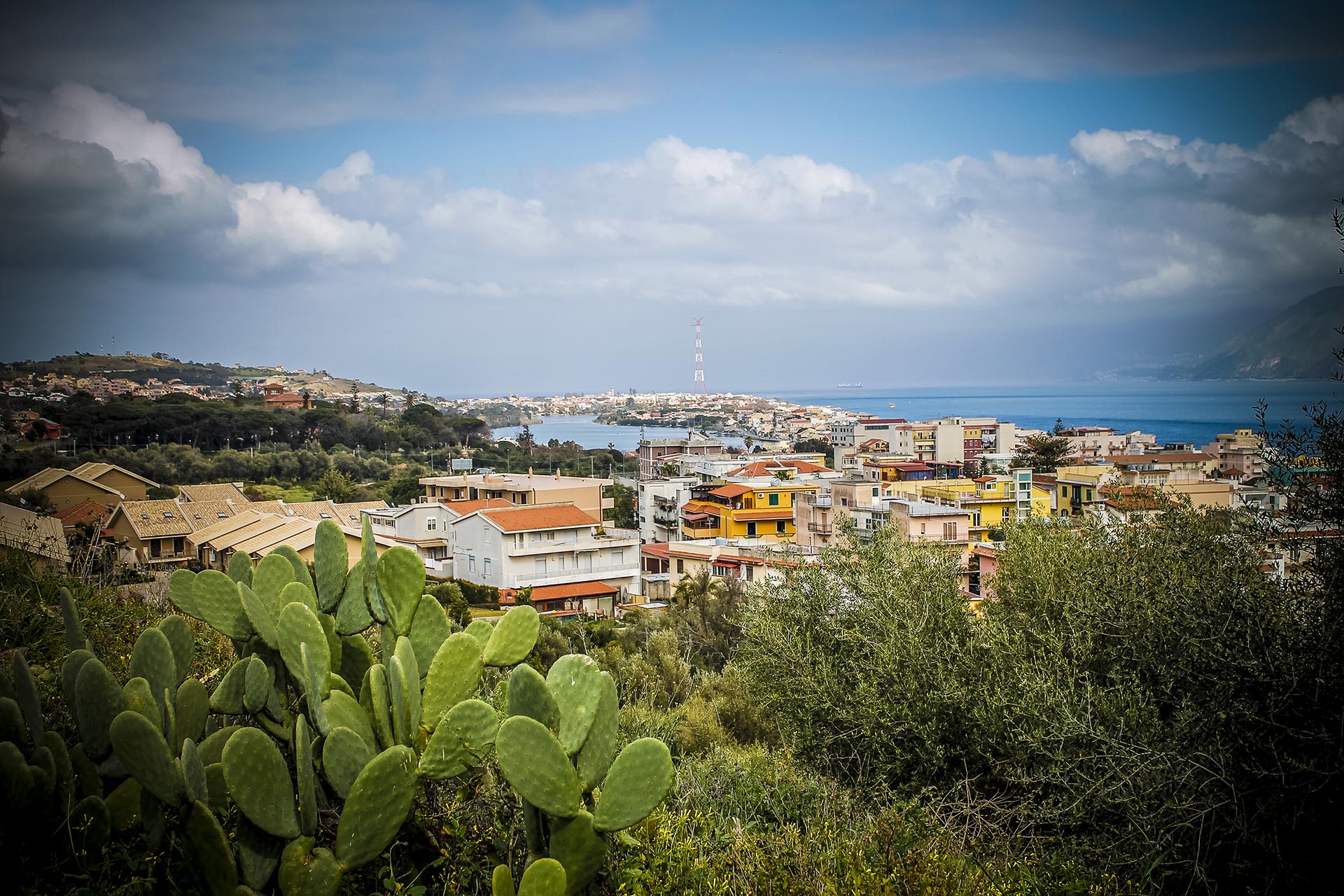 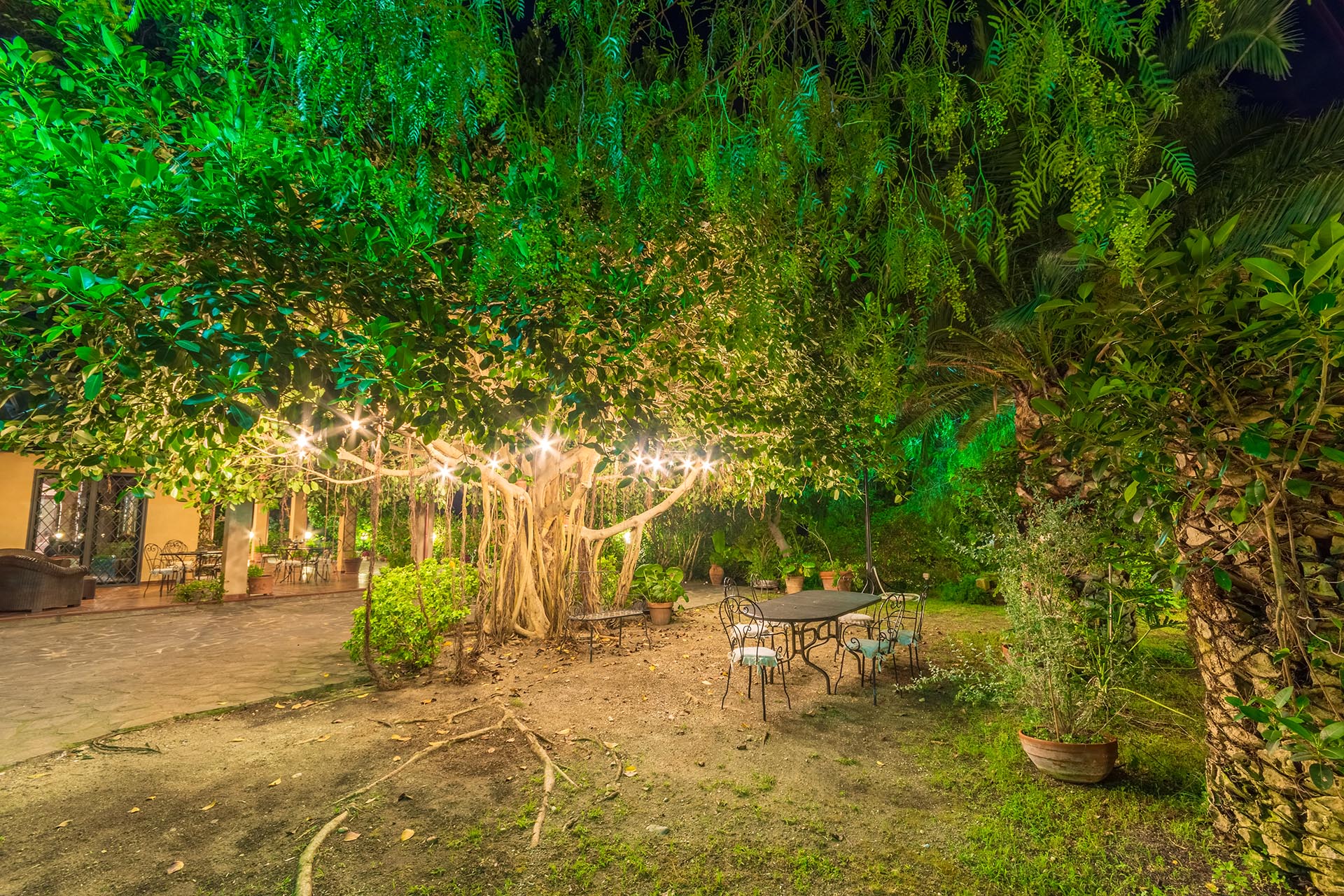 Saturday in the garden

A living library for green fingers

The garden of wonders on TV